Thought I’d post this interview with Fate on my blog for those of you who might’ve missed it back in April when it went up on Laurie’s Interviews. It was such a fun one, and I haven’t done any other character interviews since then. Hope you enjoy getting to know Fate a little better. 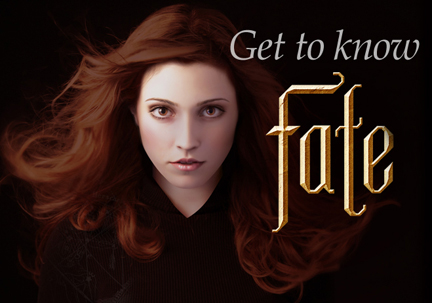 Laurie: What is something people would be surprised to know about you?

Fate: I’m a bestselling author. People don’t expect that when you’re only seventeen years old. Even I didn’t expect it, especially since I wasn’t trying to get published. But then things like that are always happening to me. I blame it on my name.

Laurie: Do you have a favorite quote, quip, or saying? What is it?

Laurie: As a child, what did you want to be when you grew up?

Fate: Interesting. There are way too many boring adults out there.

Laurie: What would you consider to be the best book you have ever read?

Fate: If I have to pick just one, which is super hard for me, I’d have to say Peter Pan. I could relate to having a never-ending childhood. Even now I still fight growing up. Plus I really wanted to fly. There was a time when I would’ve traded in ten years worth of Halloween candy for some fairy dust. But look who’s flying now? Move over Tinker Bell. I’ve got the Words of Making.

Laurie: What are you passionate about these days?

Laurie: What is your favorite meal?

Laurie: What songs are most played on your Ipod?

Fate: All of Poalo Nutini’s songs. I love his voice, plus he’s Scottish with Italian ancestry––a yummy combination I can’t resist.

Laurie: Do you play any sports?

Fate: Is this before I got chucked inside the Book of Fables and had to learn to kick some serious monster ass? Let me put it this way, my main goal––up until I recently started doing the Xena warrior princess thing––was to avoid any activities which could potentially exhaust me.

Laurie: Who should play you in a film?

Fate: Emma Stone, she’s the only one I’d trust to carry off my wit and charm. Okay, if you must know, I’m counting on her to make me look witty and charming.

Laurie: Where do you dream of traveling to and why?

Fate: Willie Wonka’s chocolate factory. Why? Because there’s a chocolate river running through it and I like to swim.

Laurie: What was the scariest moment of your life?

Fate: Oh that’s easy. When I was dragged underground into a nest of worms and blood-sucking roots.

Laurie: What one word best describes you?

Fate: Fiery, but in a spirited way. Not a bite-your-head-off sort of way. Oops, sorry. You said one word. Fiery.