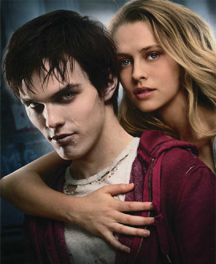 I was sixteen the first time I saw a zombie movie and it freaked me out so much I had nightmares. This concept of the dead coming back to life all decayed and wormy completely infected me with a deep-seated fear. In fact, I still have the occasional zombie nightmare. Has this kept me from watching zombie movies all these years? Hell no. I don’t know what it is about those foot-dragging, moaning, gray-skinned cadavers, but they keep pulling me back in. Although I’ll mostly only watch the ones that spoof the undead.

But now after watching Warm Bodies last night, I have to say it’s become my all time favorite zombie movie next to Shaun of the Dead and Death Becomes Her. I never thought in a million years I’d find a zombie lovable, but R won my heart. Think of Romeo & Juliet meets The Walking Dead, and you have Warm Bodies. At first this unlikely romance was super uncomfortable for me, but then became so surprisingly touching I’m still feeling the warm and fuzzies. This is a must see for anyone who wants a great feel-good spooky movie to watch on Halloween. Unless of course you want to be scared out of your wits, then you should watch 28 Days Later.