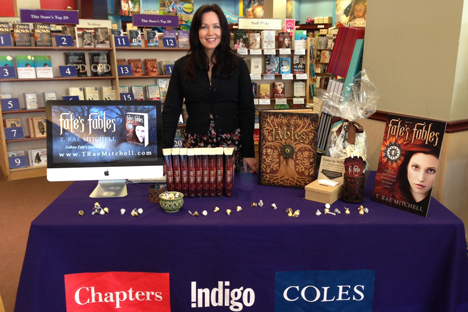 As fate would have it, another one of my favorite bookstores is closing at the end of this month. For many of those who live in Richmond, I think it’s going to leave a big hole, especially since the bookstore was one of the first Chapters to open in BC fifteen years ago. I’m certainly heartbroken. The managers and staff have been hugely supportive of local authors like me, and I will always be grateful to them for placing Fate’s Fables among their staff picks.

This isn’t the first of my beloved bookstores to bite the dust. From 1996 to 2007, I walked through the magical doors of Scott’s Bookstore in Mt. Vernon every two weeks to wander the aisles while I waited for a table to open in the adjoining restaurant, Calico Cupboard. It was always at least a 30 minute wait, because the breakfasts there are that good. Actually, the waiting was the best part because I loved hanging out in the kid and teen section to see what was new on the tables and shelves. 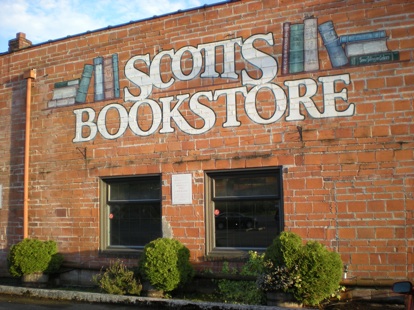 Scott’s was an independent, family-owned bookstore. A lot of its charm came from the century-old granary building it was in, with book ladders that rolled along the brick walls, exposed pipes and wooden floors patched with copper plates. But mostly it was the spirit the owners breathed into the store, with all the antique tables overflowing with gorgeous book displays, comfy reading chairs and handwritten reviews on bookmarks tucked into stacks of chosen books.

When Scott’s closed in 2007, I took it pretty hard. I still had to make my biweekly trip to Mt. Vernon so my son could visit his other dad, but it really hurt to see that walled up entrance to the empty bookstore while I was waiting for my table at Calico Cupboard. Not to mention boring.

Strangely though, something good came out of my sadness. One day I thought about the emptiness left behind in that hollowed-out store and wondered what I might see if I was able to get inside. Had anything been left behind? That’s when my crazy imagination offered up a giant ten-foot tall book. A magic Book of Fables to be exact. Then a girl named Fate stepped into the scene. In a flash, I knew she was destined to plunge inside the Book of Fables, journey through eight dark fables and have to rewrite them into happily-ever-afters to escape.

Life’s funny that way. If Scott’s hadn’t closed I never would’ve come up with idea for Fate’s Fables. But I sure do wish my bookstores would stop going the way of the dodo bird. Which is why I placed my main character’s book signing (Fate’s an author) in the Seattle Public Library. Libraries are fast becoming the new hangout for bookworms. I wonder if Starbucks will start popping up in them? Let’s hope so, because I’m not too crazy about the stiff library vibe. They could loosen up a bit.