It’s been 37 years since a gang called the Warriors first hit the streets of New York in the 1979 cult classic movie, The Warriors. I’ve been a fan of the movie, since I first saw it in the mid 80’s. The story about how they fought their way back through enemy territory to their home turf on Coney Island was an unforgettable ride. The movie itself wasn’t a huge hit when it came out, but for some of us, it struck a deep chord.

I’m amazed at how The Warriors continues to attract fans after all these years. In fact, The Village Voice recently announced that die-hard fan, Eric Nyenhuis, has organized a reunion on September 13th on Coney Island! Both the heroes and the bad guys will be there, including my favorite enemy gang, the painted, baseball bat carrying Furies. There’s going to be a cosplay contest and live bands and watching the film on the Coney Island boardwalk. Man, I wish I could be there for that! Sniff, sniff  🙁

If you haven’t read my earlier posts about the inspiration behind Magic Brew, here’s a recap on how my supernatural version of the Warriors came to be:

The main character from my fantasy novel, Fate’s Fables, fluked into writing a bestselling novel called Magic Brew. This came about after Fate was given an English assignment, which was to choose any book about gangs in the 1960’s and write a unique spin on a favorite chapter. Being the fantasy geek she is, Fate turned her story into a big rumble between supernatural gangs. After her teacher entered her work into a contest and she won, a publisher contracted her to expand the idea into a novel. (Nothing small ever happens to Fate). The book chosen for this assignment was Sol Yurick’s, The Warriors, which takes place on Independence Day. I’ve always been a fan of this 1979 cult classic film, so it only seemed right to place Magic Brew in New York City on the Fourth of July. 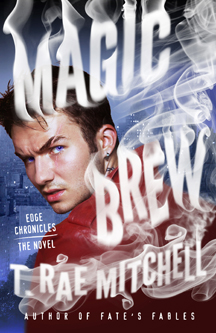 I had planned to write Magic Brew after I finished the Fate’s Journey books, but because some of Fate’s cosplayer fans come along with her in the second book, Fate’s Keep, I needed to flesh out the outline for Magic Brew to ensure I had a firm grasp on the characters her fans are so crazy about. However, once I started developing the story, I couldn’t get the Magic Brew characters to be quiet. They wanted their story written, and they wanted it now! Since there’s no ignoring that many voices in your head, I decided I’d better get it done.

I’m happy to say Magic Brew is available for pre-order exclusively on Amazon. And get this, it’s scheduled for release on September 15th, only two days after The Warriors reunion. How wild is that?